The Traffic Division of the Penn Hills Police Department was established in 1978.  Traffic officers are assigned to handle calls for service that involve motor vehicle complaints and vehicle accidents.  Officers conduct traffic related studies and concentrate on enforcement of vehicle code violations.  The primary goal of the Traffic Division is to promote traffic safety and safe passage for all of those who use the roadways in Penn Hills.  Lieutenant Michael McGuire supervises the unit.

Officers assigned to the Traffic Division undergo additional training in collision investigations, and other topics that are unique to their assigned role within the department.  They utilize specialized computer software and equipment to reconstruct serious traffic accidents, as well as investigate parking and abandoned vehicle complaints. 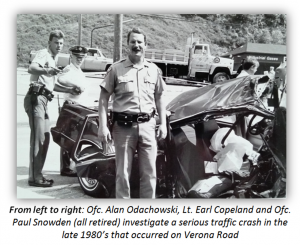 Contrary to popular myth, police officers do not work on any “ticketing quota” system.  In fact, the Pennsylvania Consolidated Statutes prohibit government entities from the use of any quota system that requires police officers to issue a certain amount of traffic citations on any weekly, monthly or yearly basis.  The issuance of traffic citations is not to punish motorists, but rather to correct driving deficiencies, many of which are the primary cause for an overwhelming amount of serious vehicle crashes across the Commonwealth.

The Penn Hills Police Department participates in the East Hills DUI Task Force, which comprises of several local police departments in the eastern suburbs of Allegheny County.  The task force conducts DUI checkpoints throughout these communities at various times during the year.  The police department also participates in the national “Click it or Ticket” initiative, sponsored by Buckle-Up Pennsylvania.